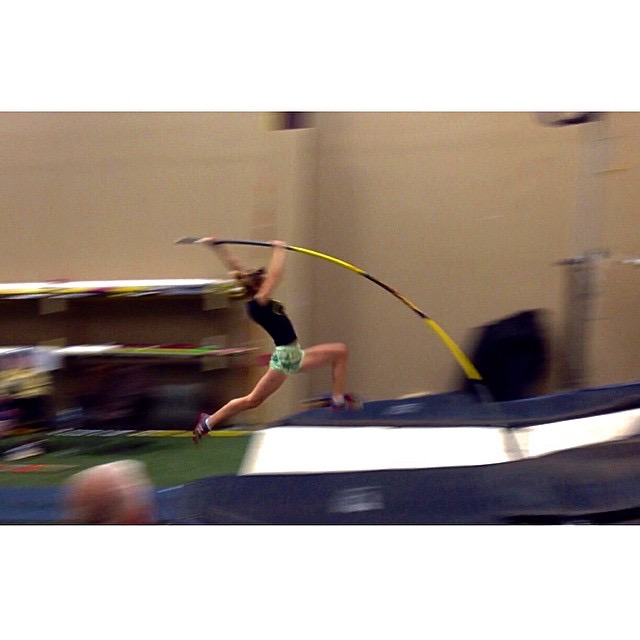 Welcome to the ‘CHAMPIONSHIP SEASON” . It is time to deliver….. and the ‘Circus Mailman’ was active with delivering some great results this weekend. Congratulations to ALL VAULTERS…FAMILIES and COACHES…… DREAMS DO COME TRUE !!!!

Southwest Great News…. EMILY SAVAGE has returned ….. the 2013 HS NATIONAL VAULT CHAMPION from Weston, CT is rounding back in super form with her winning 12′ 8.5″ jump yesterday in Norman,Oklahoma at the Bison Invitational …and super jumps at 13′ 1″ on her 13’1 x 150!!! After great work on the drive take off with her club coach Tim McMichael for the last 15 months…Emily is back better than ever and ready to move up to 13′ 7″ and 9 Step approach . The Penn Relays Record Holder at 13′ 1.5″ is ready for more…Congratulations Emily !!!!

College Results…. Todd Uckermark(High Point,NC) enjoyed his 15′ 5″ performance for a second place finish at JD FastTrack…as team mate jumped 16′ 4.75″ for the win. TJ Murphy(UCONN) lifted 15′ 5″ also for the Huskies. Sarah DeVita..a senior at University of Virginia hit her personal best of 12′ 8.5 also this weekend. The former Ridgewood ,NJ elite hurdler is excelling in pole vault in college. Ridgewood Team Mate Kayla Polcari jumped 12′ 1″ this weekend for Notre Dame at the Spire meet… Grace Weisbecker..Soph at University of Vermont won gold at 12′ 5.5″ at the Harvard Open on Saturday and now moves to the 1′ 7″ series. Dana Fineman(Moravarian University,PA) is jumping off the charts with her 11′ 11.75″ for gold in PA Meet at Susquehanna Invite. Up in Boston… Destiny DeStascio(Kutztown,PA) leaped 11′ 5.75PR and moved to 13′ 7″ series…and Kara Snyder(Villanova-freshman) jumped 11’5.75 for Coach Singer. Karmen Auble(Xavier University,OH) looked strong making 11′ 6″ for Coach Ryan Orner. Kari Murnane(New Hampshire) freshman was finally cleared from injury to compete in her first meet..and hit 10′ 4″ from small run . Lexi Schachne(Harvard) placed 4th in the Harvard-Yale-Princeton BIG MEET!!!

CONGRATULATIONS to Warehouse Pole Vault Coach Jim Henderson for his Coaching Award this past weekend from USATF!!! Jim has given his heart and Soul to promoting pole vault on Long Island for the past 30- years!!!! He has built Champion Pole Vaulters and Championship Human Beings !!!

The FLYING CIRCUS will be hosting a HS LAST CHANCE QUALIFIER MEET on Sunday March 1 for any Boy or Girl that is close to qualifying for the New Balance Nationals. Meet starts at 4PM Co ED Girls bar starts at 10′ 0″(Just like Nationals) and Boys start at 13’0″(Just like nationals. Cost $30 per athlete///Free Parking/Music.